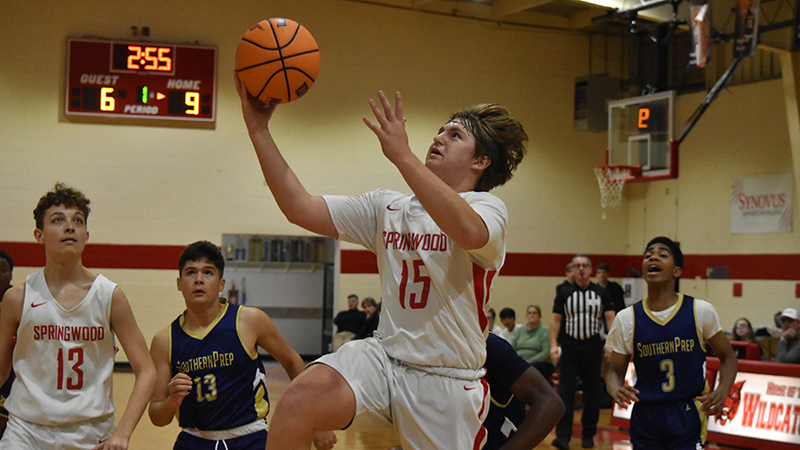 A dominant third quarter charged the Springwood junior varsity boys to a 56-29 win over the Southern Prep Fighting Rangers on Thursday.

Springwood got off to a fast start as the Wildcats hit back-to-back threes to open up on a 7-0 run.

Southern Prep started hitting threes of their own, and it helped the Fighting Rangers close the lead to 14-11 at the end of the first quarter.

Things seemed to be going well for the Wildcats in the second quarter until Southern Prep got more aggressive on defense in the final minute of the half.

The Fighting Rangers ended the quarter on a 6-0 run, and the Wildcats found themselves down 21-20 at halftime.

Springwood junior varsity head coach Calvin Crabb explained what happened at the end of the half.

“Our guys got a little bit too relaxed with the score,” Crabb said.

“We got onto them a little bit, and they got back in the right mindset after halftime.”

The Wildcats used the third quarter to bounce back and take control as Springwood shut out the Fighting Rangers and took a 32-21 lead heading into the fourth quarter.

Springwood wore out Southern Prep in the final eight minutes and took home a win.

“I tried to tell them to slide their feet a little more, and we’ve been working on that in practice. It’s good to see that came into play. We have to play with confidence. We know these guys can do it. They just have to believe in themselves. They played with confidence this game, and it showed. We need to work on ball handling. If more guys can handle the ball, that’ll make it easier in the long run.”

Springwood’s Tucker Sides was the leading scorer for the Wildcats with 19 points while JJ Barber was second on the team with 14 points with 10 of those coming in the second half.