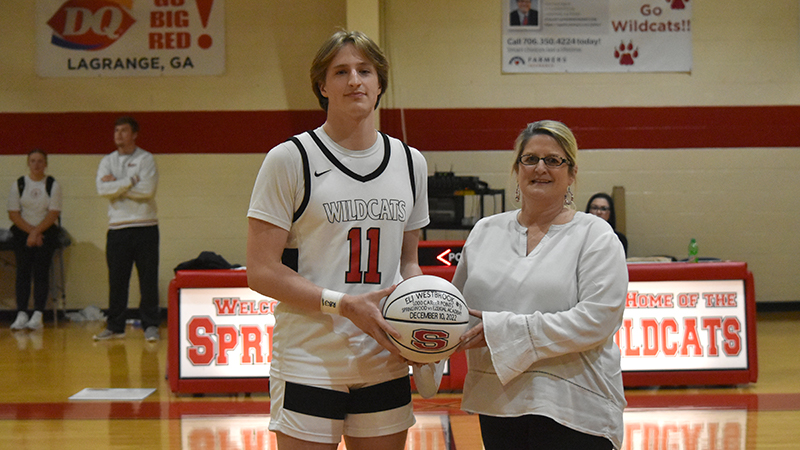 The Springwood Wildcats fell 64-54 to Lee-Scott Academy on Thursday, but Springwood’s Eli Westbrook celebrated his 1,000th career point in the process.

Westbrook is proud to have his achievements recognized.

“It was a big milestone to pass,” Westbrook said.

“I’m a swimmer, so to be able to play basketball on the side and score 1,000 points for the school, it’s a really big thing. We’ve had a lot of ups and downs, but I wouldn’t trade it for anything. I love Springwood. I wouldn’t want to play at any other school except Springwood. It’s been a great seven years here playing basketball.”

The Wildcats got off to a slow start in the first quarter as Lee-Scott took a quick 8-2 lead.

Springwood fought back thanks to Eli Westbrook’s post play and closed the lead to 13-10 at the end of the first.

Springwood hung with the Warriors until two minutes left in the first half when a Micah Thomas free throw gave the Wildcats their first lead of the game.

Lee-Scott was able to retake the lead and head into halftime up 28-26.

Neither team would give up the lead in the third quarter as the largest lead was a Lee-Scott four point lead.

The teams headed into the final quarter tied up at 43, but things started falling apart for the Wildcats.

Springwood took a 47-46 lead early on in the quarter, but Lee-Scott went on a 12-0 run to secure the Warrior victory.

Westbrook explained what happened in the fourth quarter.

“We had it. We were in the game the whole time,” Westbrook said.

“They started breaking down the defense at the end of the fourth quarter. I feel like we should have switched defenses, but it is what it is. I feel like we played hard.”

Westbrook finished the game with 14 points.

Springwood head coach Lisa Sampson knows that her starters were tired at the end of the game.

“I think there were just too many turnovers on our part,” Sampson said.

“We just got out of what we were trying to do. We got slower and had turnovers. We just didn’t finish. We had great effort up until then.”

Sampson was still pleased with how her boys fought.

“I thought they executed offensively and defensively,” Sampson said.

“I’m super proud of them. The rebounding was good. We just have to tighten up a little bit. We were off as far as shooting. That’s a testament to Lee-Scott’s defense. We can learn a ton from this. This will toughen us up. We’re going to go back to the drawing board.”