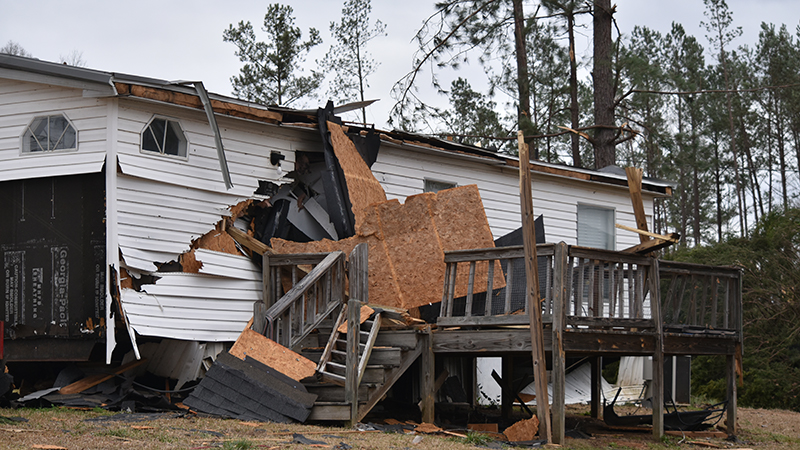 Standing Rock was hit hard by a tornado, but some residents were luckier than others.

Korey and Trenton Pijnenburg saw their home hit hard, but most importantly the couple and their baby came out unharmed.

“We have an eight week old baby,” Korey said.

“I was up here. I went down to his [Trenton] parents’ house. It was going pretty fast. We didn’t think it was going to be bad. We got under the stairs. They told us to take cover. Next thing you know, the whole house is shaking. His dad comes out. He said everything is gone and the house is pretty messed up. I was just trying to get in touch with him [Trenton] at that point.”

The Pijnenburgs were safe during the storm.

“We all just took cover in the big house down there,” Korey said.

“We were all safe. Even the dogs got in there with us.”

Korey reflected on the moment the tornado hit.

“It was very scary,” Korey said.

“It wasn’t anything like what I expected. I was just trying to keep everybody calm in the situation and worry about it afterwards.”

Trenton was in Arkansas when the tornado hit, but he drove all the way back to Standing Rock to be with his family.

“Monday morning at about five o’clock, I left with some buddies to go duck hunting,” Trenton said.

“We went out yesterday morning. I went to take a nap, and then she [Korey] called my buddy, and he woke me up. He said, ‘Hey we’ve got to go.’ We got home at about one o’clock last night. Luckily, he had room in his house to stay there. Our back door is caved in.”

The Pijnenburgs are focused on rebuilding.

“We’ll get this cleaned up and get our belongings out,” Korey said.

“We’ll go from there and try to rebuild.”

“We’ll have to see what insurance says,” Trenton said.

The Pijnenburgs are pleased to have the community help them.

“Everybody showed up and has done outstanding work,” Korey said.

“It looked terrible out here yesterday. It’s getting somewhat cleaned up. People showed up from everywhere to help us, even last night as soon as it happened. I just thank everybody for what they’ve done so far, and I pray that everybody around here gets the help they need. We’re thankful to be safe.”