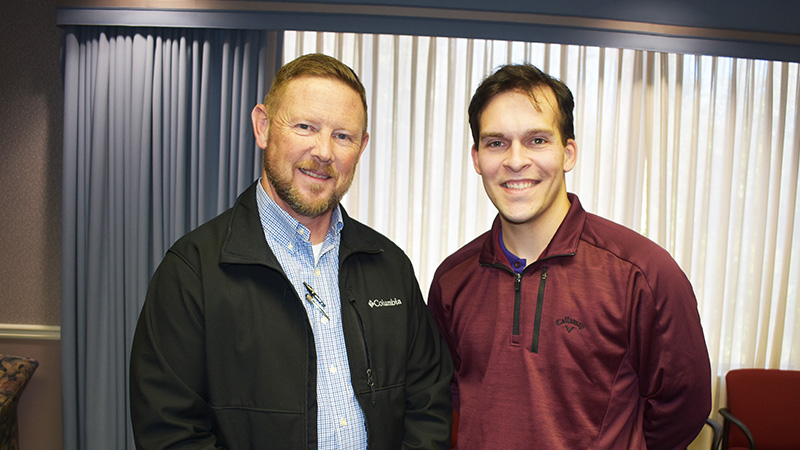 WEST POINT — Lanett’s new airport manager, Richard Carter, was the guest speaker at Thursday’s noon-hour meeting of the West Point Rotary Club. It was the club’s first meeting of the new year, and Carter talked about the extraordinary opportunity that’s out there right now for Lanett’s bigger and better airport. At 5,400 feet in length, the new runway is plenty long enough for corporate jets to land, and its smooth surface has been drawing lots of praise from pilots who have landed there. One of them recently told Carter it had provided him the smoothest landing he had ever had at any airport in Alabama.

“I get calls every day from people asking if they can base their plane at Lanett airport,” he said. “I’m really excited about what’s been going on there, and the opportunity for it to be a very busy place. It’s definitely a major asset for the entire region. Everybody I have talked to is optimistic about the airport’s future. Pilots have told me that this airport is a gem. They like it that it’s so close to the interstate, has a runway more than a mile long and has such a good surface to land a plane.”

The original airport dates before I-85 was built through Chambers County.

“A paved runway some 3,150 feet long was built in 1959,” Carter said. “It was built on a 160-acre site. There have been a lot of changes in the way aviation is now being funded from the way it was back then. In 1959, 15 percent of the funding for airport construction was provided by the state, and the rest was local. Today, the Federal Aviation Administration (FAA) provides 90 percent of the funding with the rest being divided between the state and the local community.”

An estimated $17 million has been spent on lengthening the runway in two phases. In the first phase, a new runway an estimated 4,400 feet in length was built to replace the old one. Plans were being made to open it when more funding was approved to lengthen the runway an additional 1,000 feet, making it long enough to be a regional airport.

Lanett’s proximity to Auburn was a major factor in the FAA’s decision to expand the runway to more than a mile in length. The Auburn airport is exceptionally busy, especially on game day weekends. Plans are to build a control tower there to handle the excessive air travel coming in. That could result in even more plane traffic arriving, something that makes a backup airport just off I-85 in Lanett a growing need.

Perhaps the biggest single factor in getting the airport project to where it is right now is the fact Senator Richard Shelby was a very powerful man in Washington, D.C. when the funding was approved. Now retired, Shelby was a big booster of airport improvement projects in his home state.

Carter said the potential has always been there to develop a regional airport in Lanett. Its proximity to I-85 and Auburn are big pluses. During the heyday of WestPoint Pepperell, the company had three jet planes, none of which could land in Lanett. Travel by car to LaGrange and Columbus was necessary when a plane needed to take a trip or was landing.

Carter said that having three planes based outside the local area could have cost the city up to $800,000 a year in lost revenue.

City-owned airports generate revenue with fuel sales and the lease of hangar space. The opportunity to do that is very much out there today, provided the city leases hangar space and has two types of fuel. The airport is set up to have fuel for the smaller, propeller-driven planes but will also need to have jet fuel available for the corporate planes that will be landing and taking off.

From the 1980s on, city leaders have talked about expanding the airport, but serious action got started in the administration of the late Oscar Crawley in the early 2000s. “Land acquisitions were made, and environmental studies had to be made,” Carter said. “The federal assistance that was available was helpful.”

The City of Lanett created the position of airport manager this past year and named Carter to the position in November.

“When I was growing up, my dad was a pilot and flew both planes and helicopters,” Carter said. “I had the ambition to be like my dad and fly and to also serve as a police officer. I’m fortunate I have been able to do both.”

Before taking his current position, Carter had a long career with the Chambers County Sheriff’s Office and served several years as Sheriff Sid Lockhart’s chief deputy.

In 2018, the old airport was closed for the construction of a new runway. There’s a large hangar in place where up to 10 planes can be stored. There’s also nearby land that can be used for more hangars and tie-down spaces. A new terminal was built in recent years. It has both an aviation side and offices for the Chambers County Development Authority (CCDA). It’s one of the few places where a business class jet can land, taxi up to a terminal where potential developers can get off the plane and walk a very short distance to the office to meet the people they need to talk to.

“It was such a good move to have the CCDA office in the terminal,” Carter said.

Project engineer Goodwyn, Mills and Cawood has a five-year capital improvement plan for the airport.

The plans for 2023 call for pavement reconstruction for a taxi lane to the T-hangar, pavement reconstruction for the runway apron and the installation of a security fence. Site grading and paving will be taking place around the terminal in 2024. An apron expansion is planned for 2025 with the installation of an automatic weather observation station (AWOS) and a precision approach path indicator (PAPI) planned for 2026. PAPI is a visual aid that provides guidance information to help a pilot acquire and maintain a correct approach to land a plane.

In 2027, the capital improvement plan lists land acquisition for an entrance road to be done.

Plans call for an entrance road to be built from Phillps Road to the terminal area. This would be a much shorter route from the interstate than what’s presently available. The road would start at the traffic signal between the Hampton Inn & Suites and the Boom City fireworks warehouse. Another road would branch off this main road and go toward the eastern side of the runway, the area closest to I-85. This is a prime site for aviation maintenance businesses.

Carter said that once activity starts to pick up at a steady pace, the sky is the limit for Lanett Municipal Airport.

“The more activity you have, the more money you can get from the FAA,” he said.

He’d like to get local students interested in aviation and possibly considering a career in the field. He thinks it to be a good program to teach at Inspire Academy.

“I love this airport, and I am so glad to be here,” he said. “There is so much potential to be realized here.”