Valley dominates Lanett to improve to 22-0 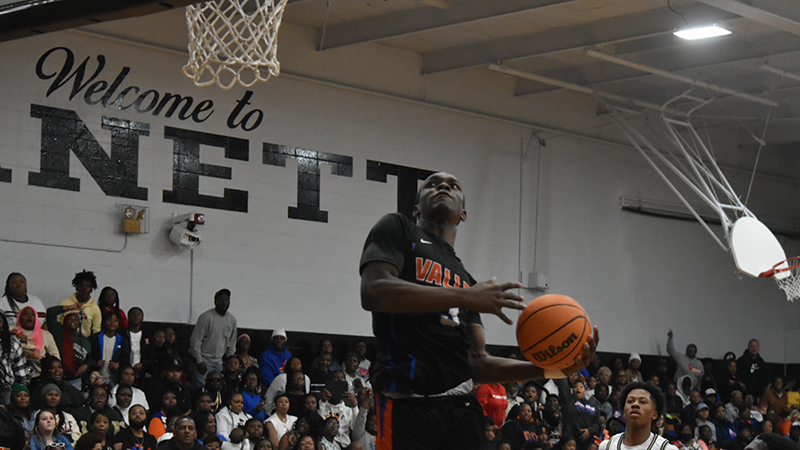 The Valley Rams improved to an unprecedented 22-0 after dominating the Lanett Panthers 71-41 on Saturday.

The Rams have struggled with slow starts in a few games this season, but that wasn’t the case against Lanett as Valley got off to a fast 10-2 start.

The Rams were able to match Lanett’s speed on both sides of the ball, and it didn’t help that the Panthers played a double overtime game the night before.

Valley took a 25-11 lead at the end of the first quarter, and things didn’t get any easier for the Panthers as the Rams’ starting five continued to force turnovers.

Lanett head coach Tay McCants feels like his guys could’ve played better, but he knew they were tired.

“I don’t think we came out like we were ready to play tonight,” McCants said.

Valley head coach Marshon Harper is pleased with how his team came out at the start.

“They came out and played well,” Harper said.

“We played well from the beginning to the end. We played good team ball. Hats off to Trentavious’ team. I used to coach him. He played under me. He does a great job with that team.”

The Rams have a target on their back as every opponent wants to hand Valley their first loss, but Harper knows his players aren’t under a lot of pressure.

“They’re chasing us. If we keep running, they can’t catch us. We’ll just continue on and watch film. We’re going to host the [area] tournament, so we have to bring our best game.”

The Rams also had to play without one of their starting guards, Jay Harper, who was on a recruiting visit at Florida State.

Harper was pleased with Ian Crim-Davis, who took over as a starter.

“He did a great job,” Harper said.

“I told some of the kids they had to step up.”

The game may not have been as close, but the local rivalry was enough for the Rams to get pumped up before the game.

“All I have to say is Lanett,” Harper said.

“They’re going to get up for them. We’ll have to live with this for 365 days if we lost this game. They got up for it. We’re trying to build our brand.”

McCants wants his players to learn from the tough loss.

“We have to keep fighting,” McCants said.

“You just have to try and keep the game close. I try to get us a tough schedule so we can prepare for the 2A playoffs. That’ll help us in the long run.”

Jamarious Martin was the leading scorer for the Rams with 18 points.

Cam Dooley had a double-double with 17 points, 13 rebounds, five steals, three assists and a block.

The Rams will prepare for their next area matchup against Tallassee on Tuesday.

The Panthers fall to 5-7 and will have two area games next week.