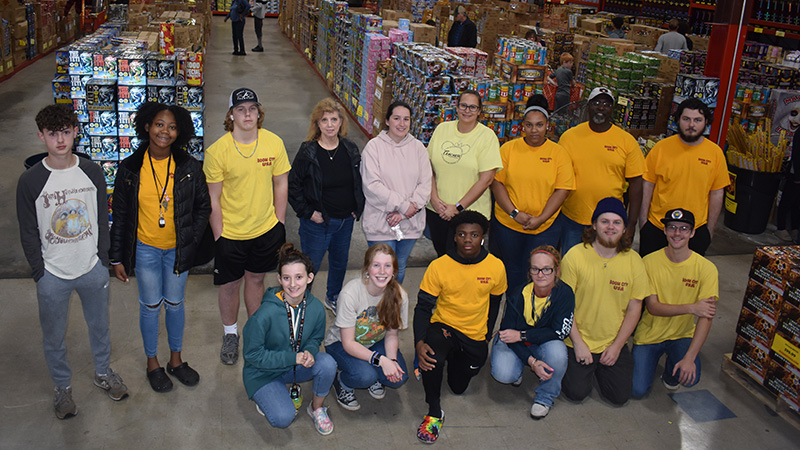 LANETT — Business was really booming at Boom City USA heading into the New Year’s holiday, and a team of local youth helped handle the rush of people buying fireworks for the big end-of-the-year celebration.

“This is the make-it or break-it time of year for us,” said Store Manager Marsha Pickens. “We couldn’t do what we do this time of year without 20 young people from the local area helping us out. We have so many people coming here, especially on the 30th and the 31st. We are also really, really busy around the week of July the Fourth.”

Boom City’s big warehouse just off Extt 77 on I-85 is the place to go for any celebration. Something that’s growing in popularity is what’s known as the gender reveal. When a young woman finds out she is pregnant and her husband, friends and family members want to celebrate, setting off fireworks is a good way to get across that you are really happy about something.

People with ties to India celebrate a holiday known as Diwali. It’s in November, and people will buy fireworks for that.

Those with ties to the United Kingdom celebrate Guy Fawkes Day on November 5th. It’s a day to light bonfires and to set off fireworks in the lighthearted recollection of a failed plot to blow up Parliament in 1605, two years before the founding of Jamestown. The highlight of these celebrations is the burning of Guy Fawkes in effigy.

Pickens wants people to see Boom City as a place to go whenever they have reason to celebrate. Some local high schools send flaming rockets to the sky after winning a home football game.

“One man came in here to get some sparklers for his little girl’s doll,” Pickens said, “and the daughter really loved it. Some people celebrate weddings with fireworks. If you have something to celebrate, we have a lot of items here we can help you with.”

The five-inch, six-inch and seven-inch mortars are popular heading into New Year’s Eve. These cardboard tubes are sealed at one end to prevent hot gases from the lift charge from escaping underneath. When launched, the missile travels at an estimated 200 feet per second, or 135 miles per hour. They are harmless when launched overhead, but do not need to be pointed at any ground-level object. Rockets can go from 50 to 300 feet in the air, depending on their size, quality and atmospheric conditions. At their apex, they explode with a  loud bang or crackles, sending colorful streamers in the air.

“One good shot from a mortar will make you go ooh! and ahh!” Pickens said. “We have some fireworks that will light up in red, white and blue and some that send down parachutes. One of our items will fire 62 shots and will last up to two minutes. It lights up the whole sky and is absolutely beautiful.”

An ever popular item is the Roman candle. Some have three shots and some ten.

Boom City has been in the local area sine 2005, and Pickens has been with them since the following year. Assistant Manager Kimberly Price has been there for a number of years as well.

Boom City has a huge assortment of firecrackers, missiles, rockets, spinners, sparklers and many other items. “We have plenty of best sellers like Growler, True Art and Tank Girl,” Pickens said. “People like our wedding sparklers and gender reveal items.”

Boom City usually follows a pattern. They will sell wall to wall by July 4th. It will take them several months to restock the big warehouse, and they will sell out again on New Year’s Eve.

In late December, Boom City gets lots of business from Troup and Chambers counties. “We also get lots of people from Opelika, Auburn and Phenix City on the Alabama side and people from Newnan and Atlanta on the Georgia side,” Pickens said. “A lot of people traveling on I-85 stop here to pick up some fireworks. There’s no telling where they could be from.”

Pickens is well pleased with young people from the local area who work at the store this time of year. “They are good kids, and we are glad to have them,” she said.

Some of the crew man the cash registers in the check-out line. Others escort customers out the side door once they have made their purchases. Some work the parking lot, helping people find a parking space and seeing they get out onto Phillips Road with no trouble when they are leaving.

One of the top sellers for the past 15 years has been a brand known as Loyal to None. As long as it’s popular, Boom City USA will be loyal to it and its snarling pirate logo. Other popular items include the Peacock, the Saturn Missile Battery, Country Boy, Distractions, Go Go Gorilla, One Bad Mother-in-Law, Evil Clown, Fighting Rooster, Tears for Fear, Migraine and Pain & Gain.

Gone but not forgotten is Boom City’s mascot, Wilton. A giant, blow-up gorilla that once sat on top of the building, Wilton has been retired. He’s more of an art object now. There’s paintings of him both on the front and on the south side of the building. The same image graces t-shirts worn by the staff. “It was an adventure having Wilton on top of the building,” Pickens said. “When a big gust of wind came by he’d often get blown off the top and sometimes across the road.”

Several years back, Wilton once made it across Phillips Road and landed in a field near the Huguley family cemetery. Another time he was blown a good distance from the store and landed on a cell tower.

“We got him down, sewed him up and put him back on top of the building,” Pickens said.

Boom City USA is big in promoting safety. They encourage everyone using fireworks to always follow safety guidelines. Firefighter Mike is their spokesman and has a long list of safety rules he wants everyone to follow. They are listed at www.boomcityusa.com.