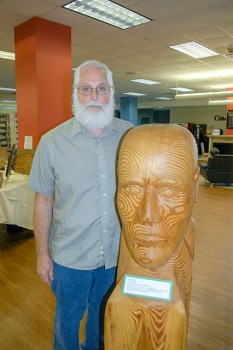 New Work: Chuck Moore is shown beside his newest sculpture, “Left the Farm.” He carved it from a huge beam of loblolly pine that went into Fairfax Mill when it was being built in 1915. 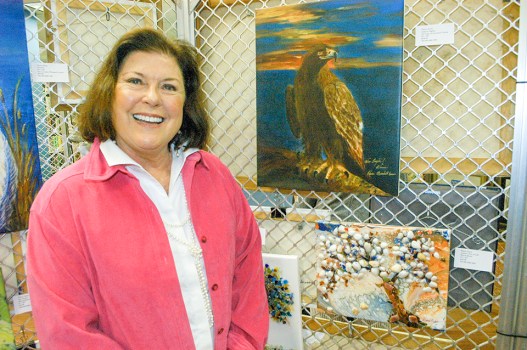 Elaine Davis is among 26 local artists who have works on display through Friday, March 29. Davis is shown with her painting of a golden eagle. She was an Auburn University cheerleader in the 1970s and continues to support the school through her artwork. 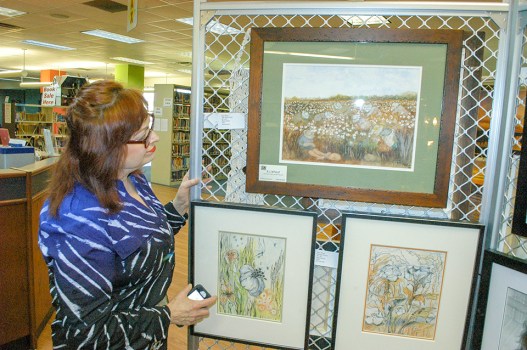 VALLEY – “Art Works: A Community Art Exhibit” debuted Tuesday afternoon at Bradshaw-Chambers County Library. A total of 26 local artists will have their works on display through Friday, March 29. The exhibit is a joint endeavor on the part of the Valley Arts Council and the West Point Fine Arts Council.

Susie Britt, president of the Valley Arts Council, has some of her works on display. Anyone who knows her daughter Dolly and her two granddaughters instantly recognize them in Britt’s work. Britt is especially proud of the artworks done by her 88-year-old mother, June Wheat.

“She’s been an artist since she was a child,” she said. “Her mother, Cora Pearl Brown, was an artist, too. She was a sculptor, did needle art, painted and quilted. I liked to watch them when they were at work. I didn’t know I’d learned as much as I did until I started taking art at Southern Union, Columbus State and at Auburn. I knew then that my mother and grandmother were way ahead of their time.”

Juan Luise Leiba of LaFayette has some truly amazing work on display. Professional photographers could envy the clarity of his color images.

“I’m drawing all the time,” he said. “I practice and practice to get as much realism and detail into what I’m doing,” he said. “My mom, Shelia Leiba is my champion. She’s always encouraging me to stay with it.”

“He’s been doing it since he was a Boy Scout in Montebello,” she said. “He learned the right ways to dry his yarn and to work with natural fibers.”

Retired game warden Gene Houston, who lives near Chambers County Lake, has some of his wooden bowls on display. He learned how to do it after picking up a wood lathe that was on sale at Harbor Freight in Opelika. He’s become quite skilled in wood turning. His bowls have a most impressive grain, a clear indication that they were well made.

Houston is also well known for the pens he makes from longleaf pine cones. He’s also made them from 2,000-year-old olive branches from the Middle East.

Lake Harding resident Elaine Davis has an Auburn Tree of Life creation made from shells that is on display. A former Auburn cheerleader from the 1970s, Davis also has a well-done painting of a golden eagle on display.

Youthful artist Jake Hill of Lanett has some of his works on display. They include a seashore scene he painted when he was 11 and a very colorful image of a giant crab he finished very recently.

Two critically acclaimed local artists, Adrian Alsobrook and Chuck Moore, also have their works on display. Art critics have praised Alsobrook’s work for the skillful way he works with color.

Moore said that working with such wood makes him realize that people come from the earth and eventually return there. Moore makes no effort to hide scars that are in the wood he works with.

“There are nail holes in it where it was nailed to the decking,” he said.

Also on display is “Hawk,” one of Moore’s favorite works. It was made from a beam of heart pine from Lanett Mill. Hawk’s most amazing feature is the big heart on his chest.