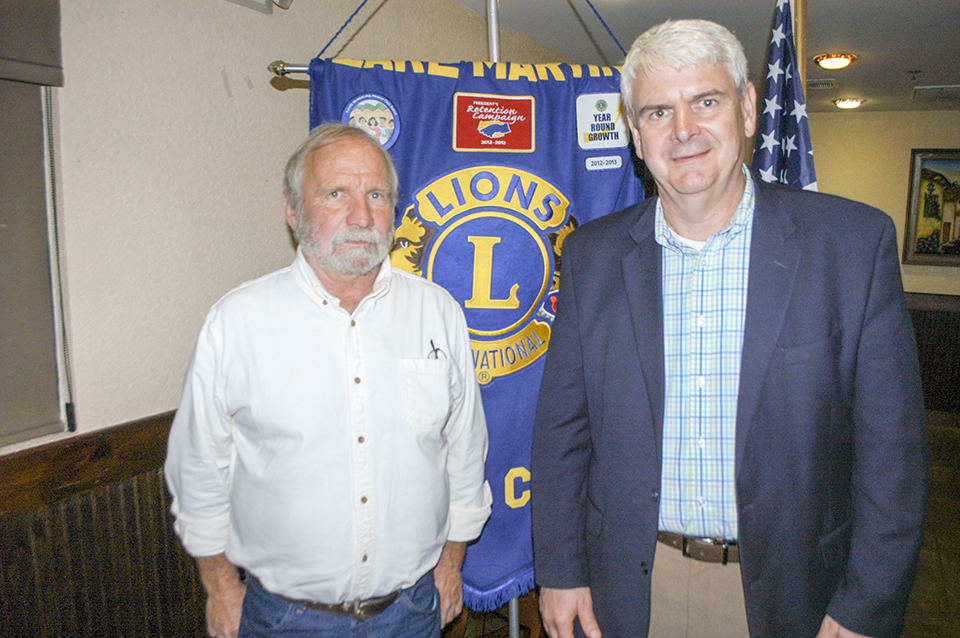 EAMC-Lanier Administrator Greg Nichols (at right) was the guest speaker at Monday’s meeting of the Valley Lions Club. He talked about the local hospital’s first five years in its current affiliation with the East Alabama Medical Center. At left is Phillip Sparks, the club president.

VALLEY — EAMC-Lanier Administrator Greg Nichols was the guest speaker at the Monday evening meeting of the Valley Lions Club and talked about the local hospital’s five-year affiliation with the East Alabama Medical Center in Opelika.

He noted that the period between 2009 and 2014 – the five-year period before the affiliation — was especially bleak for what was then Lanier Memorial Hospital.

“The hospital was struggling financially,” he said. “The mills had closed, and some doctors had retired.”

EAMC was approached by Lanier Memorial officials about a possible affiliation and liked the idea.

“They felt it would be a good decision,” he said. “It’s been five years now, and the hospital is more stable now.”

One of the biggest problems in the conversion involved the time zones.

“You could do the procedure in Opelika before you had the heart attack in Valley,” Nichols said. “We had to find vendors who could account for the time zone difference.”

Some services that were offered before the affiliation no longer are. Obstetrics is one example. With the hospital delivering only around 20 babies per month, the OB unit was eliminated. Its departure opened up space for specialty units such as acute rehabilitation. Previously, local people who needed such services had to travel many miles. Now, it’s a short drive away. Also, those who live a good distance away are traveling here.

Those who are recovering from an accident or who have had a stroke or some similar medical problem come to EAMC-Lanier for rehab.

Nichols said a current trend in health care is to have more outpatient care.

“Today, if you have knee surgery in the morning you can go home in the afternoon,” Nichols said. “Most people want to be home.”

EAMC-Lanier also has a detox unit to help those with drug addiction.

“We are helping people throughout the state,” he said. “It’s important for them to go to a rehab facility once they leave here. They may go right back to their former lifestyle if they go back home.”

EAMC-Lanier has spent some $7 million in upgrades in the past five years and more are on the way. One noticable change is the installation of a new MRI machine. It will cost in the neighborhood of one million dollars, but will be more convenient for patients while offering better images for doctors to look at.

“We have filed an application for a geriatric/psychiatric unit for EAMC-Lanier,” Nichols said. “This will be for short stays. Sometimes an elderly person who is living at home or in an assisted living facility needs to get their medication under control. We hope to have approval from the state for this in a few months.”

Nichols said one of his major goals is the recruitment of primary care physicians to come to the Valley area to live and to work at EAMC-Lanier. He said that he’s had some encouraging conversations with students at Auburn University’s VCOM medical school.

“They like the east Alabama area and are open to the idea of coming back here after they complete their residency,” he said. “There’s a clear need for more cardiologists. We have an aging population, and it would be good for them to see doctors close to home and not have to travel to Birmingham or Atlanta.”

Nichols said he was excited about the quality of health care being delivered to those who live in the east-central Alabama region. EAMC, for example, is about to open a new cancer center.

“Costs are always going up,” Nichols said. “There are financial struggles, but we are on very solid financial ground now. That allows us to buy new equipment such as the MRI machine.”

Nichols said he’d like to see the state of Alabama get past political ideology and expand Medicaid. “There’s a lot of people in our community who have jobs and are working but cannot afford health insurance,” he said.

Nichols said that if this were done a family of four making $34,000 a year would qualify for Medicaid.

A lot of families in east Alabama fall into this category.

Nichols said he was most pleased that EAMC was partnering with the Chattahoochee Fuller Center Project in building three new homes in Beauregard for EAMC employees who lost their homes in the March 3rtornado.

Nichols thanked Chambers County voters for their support in a 2014 tax referendum that provided some much needed financial support for the hospital.

“EAMC would not have agreed to the affiliation without this,” he said. “It generates $1.2 million a year. That tax is the reason the hospital is still open.”

“We want to let everyone know how these dollars are being spent,” he said.