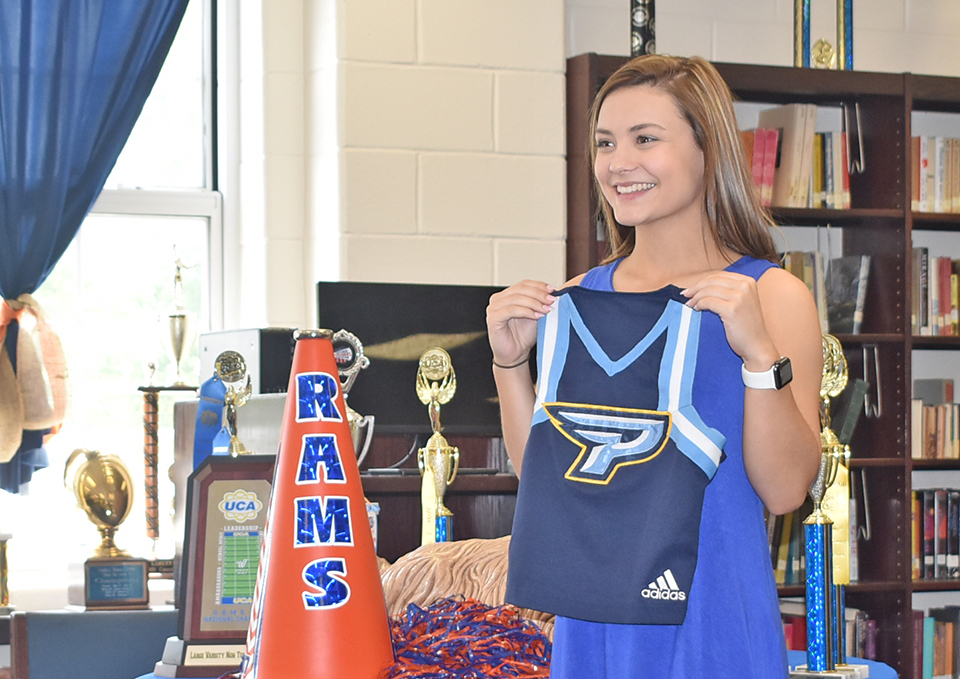 VALLEY —Katie Brooke Miles did something that no other cheerleader has done in over two decades at Valley High School on Wednesday afternoon.

Miles signed to cheer competitively at Point University to join the Skyhawks next fall.

“I definitely would not have imagined this,” Miles said of accomplishing the school milestone. “It’s definitely one of the things that I’ve strived for because I love cheer so much. It’s one of the things that I’m very passionate about, but walking out today, signing and knowing that I’m moving on to the next chapter of my life just means that all of this hard work over the past six years has really turned into something greater than I thought it would be for me from high school, but it’s exactly what I wanted and I’m very grateful.”

The senior has been a part of every competitive cheer squad, a program that started three years ago, at Valley and was apart of this year’s national champion roster. Miles’ signing is the latest result of the Rams beginning a competitive cheerleading team.

“It’s really been good to see how much it’s helped develop our squad’s skills overall to push them past what they’ve pushed through,” Valley head cheer coach Laurie Phillips said. “Ms. [Chelsie] Bunn, who does our junior high cheerleaders, has been really integral in making sure we have improved our skills.”

Miles grew up with the mindset that many students do of wanting to leave home after high school, but she said that her visits to Point changed her perspective on everything.

“Knowing that I had a coach who wanted me to be there, it made it even easier to make my decision,” Miles said. “Even though I’ve lived in the area, I’ve never seen Point students. When I went and toured, I saw a lot of people that I’ve never seen before. I’m looking forward to going to Point and meeting people from all over.”

Brumfield is another local product, graduating from Beulah High School before cheering at Jacksonville State University for a season.

Brumfield signed with Point last summer after suffering an injury during her freshman year of college.

“Honestly, I didn’t realize how great Point was until I was there in the school, and in the community of Point,” Brumfield said. “It’s like a big family. I’ve grown a lot as a person. I should’ve come here in the first place. The best decision I’ve ever made was to come back and go to Point to cheer. I really love this school.”

Miles said that she intends to become a business marketing major at Point this upcoming fall.