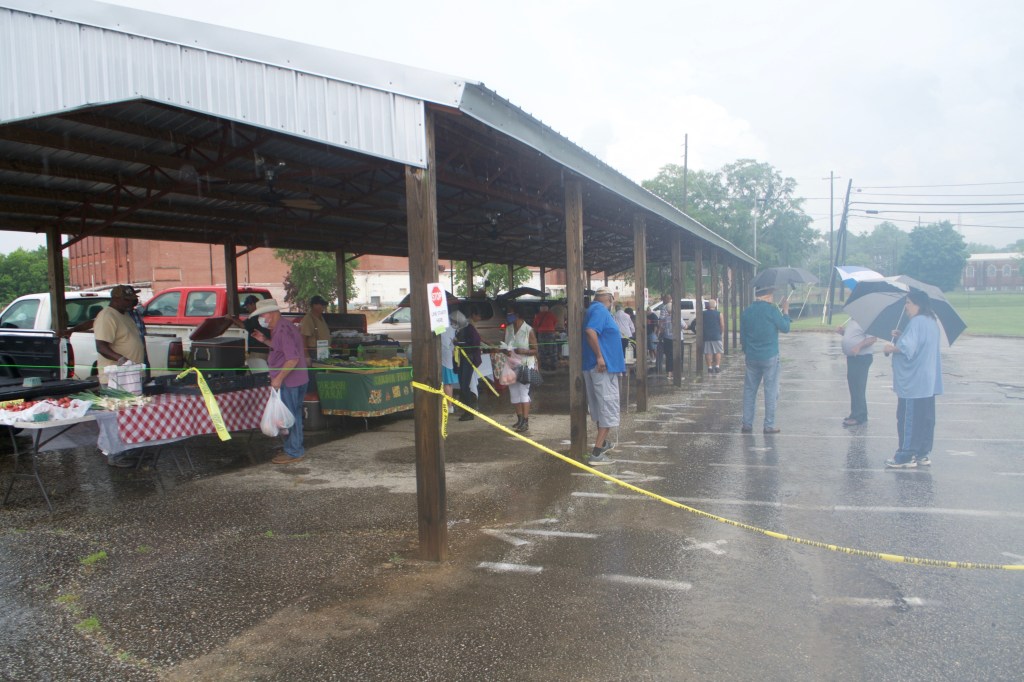 Even during the rain, the Valley Famers Market has seen a steady turnout of people since opening in late May.-- Photo by Wayne Clark

VALLEY — The crowds have been steady so far this year at the Valley Farmers Market. It takes place underneath a pavilion every Friday afternoon through the growing season.

“We will be having Tomato Sandwich Day on July 17 and a Watermelon Day in August,” said Valley Parks and Recreation Director Laurie Blount. “We will be extra careful in making the tomato sandwiches this year. You can’t just set them out on a table. We will all be wearing gloves when we make them and will be putting each sandwich in a baggie.”

Blount said she’s been pleased with the turnout she’s had on the part of east Alabama farmers and would like to see a bigger turnout of local residents to support them.

Matthew Steele, owner/operator of Steele’s  Produce, Shorter, Alabama, has one of the best-stocked booths at the market. He attributes it to working his farm year-round and having crops for longer periods of time. On Friday, he had Chilton County peaches, Notasulga plums, shelled pecans, three different varieties of tomatoes (red, green and cherry), strawberries, squash, okra, and string beans.

“We are having a beautiful year in our garden,” he said. “People are calling from all over to see what we have. When I leave here today, I will be going back to my garden and cutting 50 bunches of collards this evening. A man from Tennessee ordered them.”

Steele got into farming quite by accident. He started it on some land that was originally donated to start a church.

“My first year of doing this was 2014,” he said. “I started out with 40 acres of watermelons. I’ve diversified at lot since then. From early spring to late fall, we have a wide variety of crops. I love what we do.”

Randall and Laura McClellan of Circle M Farms in Fredonia are about 17 miles away from any town. The Walmart in Valley is about that far away from them; so is the one in Roanoke and the one in LaGrange.

“The closest store to us is nine miles away,” aid Laura. “There’s a Dollar General across West Point Lake in Pyne, Georgia.”

The McClellans love country living, and Laura has become skilled at making jelly. The couple made four batches of it on Thursday. It took them a good four hours to prepare it and then put it in jars. It was about as fresh a product anyone could find when it was on sale at Friday’s Farmers Market.

“Everything we have here is homemade,” she said. Her blueberry and blackberry jelly along with her pepper jelly are among some of the  best sellers.

Walter Pulliam of LaFayette had some really nice onions, strawberries and red potatoes at his booth. He had been farming for most of his life and long ago learned the secrets in producing bountiful crops.