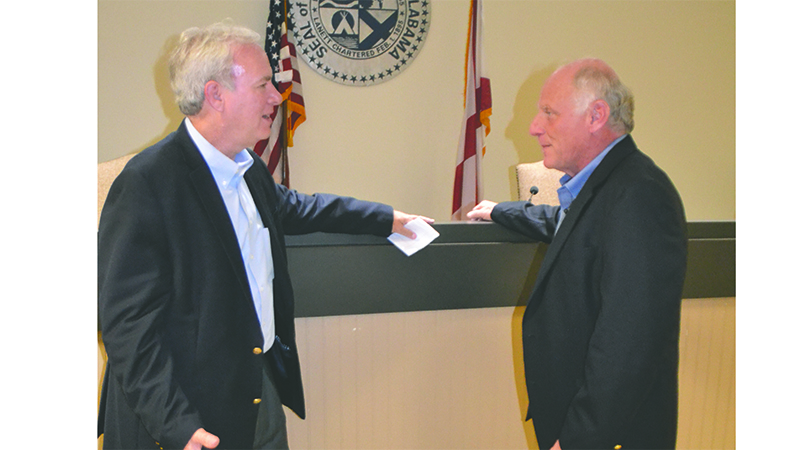 LANETT — The president of the Alabama Municipal Electric Authority (AMEA) was present at Monday’s meeting of the Lanett City Council to discuss an Advanced Metering Initiative (AMI) that will allow AMEA customers to more closely monitor their usage of electricity. Fred Clark told Mayor Kyle McCoy and members of the council that the new system will allow customers with smartphones to check on their up-to-the-minute use of electricity. It’s a way of letting them know when to conserve so they can avoid the sticker shock that sometimes comes during months of peak usage.

“You can see how much it’s costing you every day,” Clark said. “It gives you more control.”

It will help the city with remote reading capability. They won’t have to send someone to your house and write down what’s on your meter.

“I think we will be looking at time-of-use rates down the road,” Clark said.

It will likely take somewhere between a full year and a year-and-a-half to get the new system installed. Other electricity providers, such as Alabama Power, have used similar systems.

AMEA has installed the new system in six of their 11 member entities, including the City of LaFayette.

The new metering system should come in handy for an unusually cold winter, such as 2014 or 2018.

“We will be getting into this slowly,” Clark said. “It can save consumers money, but they need to know how it works. I think the AMI system we are bringing will help people, and we are glad to be bringing it.”

“This is basically budget billing is it not?” asked Council Member Angelia Thomas.

Clark agreed with that.

“We will begin the program in 2021, and it will take about two years to get it fully implemented,” he said.

“In my opinion, there are no negatives to this, but the public needs to know it’s being put in place. There’s a lot we can do for our consumers, and we have just scratched the surface on what can be done.”

“I think it will be a good thing for the city and its citizens,” he said. “I am glad to see it coming.”

In the late 1970s, Lanett and LaFayette were among 11 Alabama cities to form a coalition to stabilize wholesale power costs while sharing resources to meet mutual needs. Established in 1981, the Alabama Municipal Electric Authority (AMEA) continues to form partnerships and alliances to improve the market positions of the member entities, serving their interests and those of their customers and communities.

In addition to Lanett and LaFayette, the other member cities include Opelika, Alexander City, Sylacauga, Tuskegee, Piedmont, Luverne, Dothan, Fairhope and Foley.