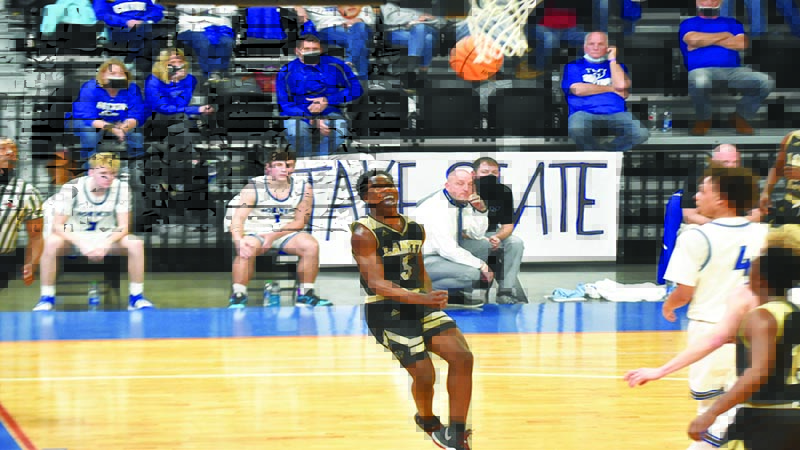 Lanett senior Larontavious Hurston flips a shot at the rim after being fouled in the first half of the Panthers’ win against Hatton in the state semifinal game.

The last high school basketball game of the 2020-21 season will take place in Bill Harris Arena on Saturday, as the Lanett boys basketball team takes on Midfield in the 2A state championship game.

Lanett has blown through its postseason schedule this season, winning on an average of 23 points. The Panthers played two games close— the Cottonwood game in the second round of the playoffs, which Lanett won by six on the road and the Geneva County game in the regional championship, which they ended up scoring 18 the final 20 points to defeat the Bulldogs.

Midfield has played three close games in its four playoff games to this point, winning those three games by an average of five points.

Overall the Patriots enter the championship game 25-6 and finished the regular season as the No. 1 team in 2A.

“I’ve seen a lot of excitement and a lot of toughness,” Lanett head coach Trentavious McCants said. “I’ve been watching them throughout the year because I knew it was going to be them or Calhoun. They have a good basketball team. They play with heart, they play with toughness.  They’re there to win it, but we are too.”

In their state semifinal game, the Patriots held off defending 2A champion Calhoun, even though five-star prospect JD Davison dropped 45 points.

“I was kind of expecting to play Calhoun, but now our whole game plan has changed because they have three or four scorers on their team,” McCants said. “My guys just have to come out and play defense. We always score in transition, but the biggest thing for us in this game is getting stops. If we can come up with a lot of stops and limit them to 50 points, I think we’ll be okay.”

Midfield plays an up-tempo style of offense that rivals Lanett’s speed in transition. Its plan on defense is to force turnovers and score in quick transition. On Wednesday, Midfield scored 13 points off Calhoun’s 15 turnovers and blocked five shots, three of which led to fast-break scores.

“It changed up our whole defensive scheme,” McCants said. “We’re used to pressing people all the time and making people play at a faster pace. They’re already at that pace, so we just have to hold them down at the basket. We’re going to switch it up and play a little zone. If our bigs rebound and our guards defend the perimeter, I think we’ll be okay.”

In the semifinal game, Davison was a star finishing with more than half of his team’s points. Midfield answered with Damariee Jones, Anthony Johnson and Jamarkus Alexander, who finished with 30, 23 and 16 points (69 of the 82 points). Two of the guards, Johnson and Alexander, are listed at 6-foot-2, while Jones is listed at 6-foot-4.

While Midfield has the height advantage along the perimeter, McCants believes the Panthers have a big advantage inside with Caden Story and Trey Abner.

Abner finished with a team-high 19 points in the win against Hatton, while Story altered a lot of Hatton shots while he was on the floor.

Lanett and Midfield face off at 11:30 CT in Birmingham.