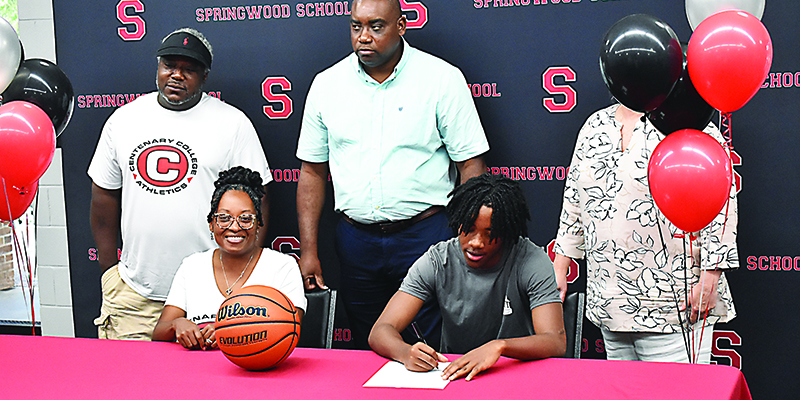 Coming from Auburn High School, Calvin Crabb made an immediate impact for Springwood’s boys basketball team, helping lead it to the Cramton Bowl and an AISA quarterfinal in his lone year.

Because of the hard work he demonstrated during his time at Springwood and on the Auburn Raptors AAU team, he was able to turn his dream into a reality. On Monday, Crabb signed with Centenary College of Louisiana.

“The main thing was the coaches. I went to a tryout, and I just loved how the coaches were real with me,” Crabb said of why he decided to sign with Centenary. “If I was playing badly, they told me that, and they told me what I need to get better at. That really showed that they’re going to do their best to improve me as a player. I just loved the winning culture that they have there because they went to a national championship for DIII two years ago. I just fell in love with that feel and wanted to be a part of that.”

Centenary finished 8-4 in a shortened season, reaching the semifinal round of the Southern Collegiate Athletic Conference Tournament.

In his lone year at Springwood, Crabb was a playmaker, finishing with a team-high 69 assists and was the team’s second-best shooter from behind the arc, hitting 25 3-point shots.

When the Wildcats traveled to Chambers Academy and nearly pulled off a sweep, Crabb played his best game of the season, scoring 23 points which included several 3s.

“Calvin didn’t make a couple of teams at Auburn High [School], but he didn’t let that stop him,” head coach Lisa Sampson said. “For me, knowing Calvin and what he’s been through, that’s what you want to see. You want to see a kid that doesn’t quit. He knew what he could do and he proved everyone wrong, and I love it. That’s what it’s going to take, you’re going to have to keep persevering, keep putting in the work and big things are going to happen.”

Transferring to a new school as a senior can prove to be a difficult move, but when Sampson recruited Crabb to Springwood, he already had some connections, as his fellow Auburn High School classmate DQ Cameron transferred as well. Along with Cameron, Crabb knew Tyrese Ferguson as they were originally going to play for Sampson’s AAU team together before COVID shut down the season.

“You would think it would be a harder move than it was, but the whole Springwood community brought me in like I was already here,” Crabb said. “Coach Lisa and Tyrese [Ferguson], they just introduced me to everyone and everyone just talked to me every day and made sure I was at home. Basketball-wise, I developed a brotherhood with the Springwood players easily. It was the same goal of winning.”

“Calvin, you were a great addition to the school. It was great to have you here,” Springwood Head of School Lowrie McCown added. “I’m sorry that it was only one year, it would have been great to have you for your entire high school career, but we’re really glad we had you for the one year. You guys, along with coach [Lisa] Sampson have helped get men’s basketball on a winning cycle. We’re really proud of you and happy for the schools that you are going to and signing to.”