Near freezing temps ahead for Christmas 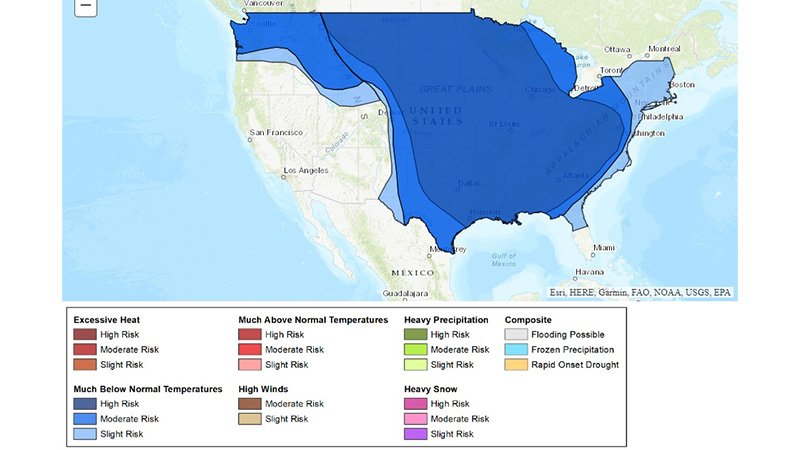 Families may need to bundle up next week in the face of a major cold front but will be safe to travel for Christmas, according to Birmingham Meteorologist-In-Charge Chris Darden of the National Weather Service. The cold front is likely to hit the Valley area by mid-week and may go into Christmas Day.

According to Darden, the cold front will likely arrive by Wednesday. The high temperature that day could still be in the 50s. However, the community will start to feel the cold snap by Thursday, where the forecast has temperatures in the 20s and highs near freezing.

Temperatures could go below freezing going into Friday morning. Then, the high on Friday could be close to freezing temperatures. By Saturday, the high temperatures may continue to drop into the low to mid-20s.

“The forecast is almost certain to go into Christmas day,” Darden said.

However, there will not be much precipitation next week and into the weekend. Darden said that as of now, the forecast looks good for those traveling for the holidays.

“Next week looks pretty dry,” Darden said. “Good news for traveling is that it looks like it’s going to be cold and dry, so it’ll be good weather for travel.”

However, Darden said that the forecast will become much more certain going into next week. A lot can happen with the weather in the time between this week and next. Darden said the uncertainty in the forecast, especially for Christmas weekend, will lessen within seven days.

“A lot can happen between that time,” Darden said. “The confidence of the forecast will get higher as we get into next week.”

According to Darden, this weekend there will be colder temperatures, especially as the sun goes down. However, the weather will be much milder than next week. The highs will be in the 50s, while the lows will be closer to the mid-30s.

“This weekend is going to be nothing compared to next week,” Darden said.

Over the last few weeks, the rain in the area has not just helped with the drought but also the temperatures. Darden said that the rain has kept the temperature high. With the upcoming cold front, temperatures may come as a shock to the community.

“People need to get ready,” Darden said. “It’s going to be a shock to the system.”