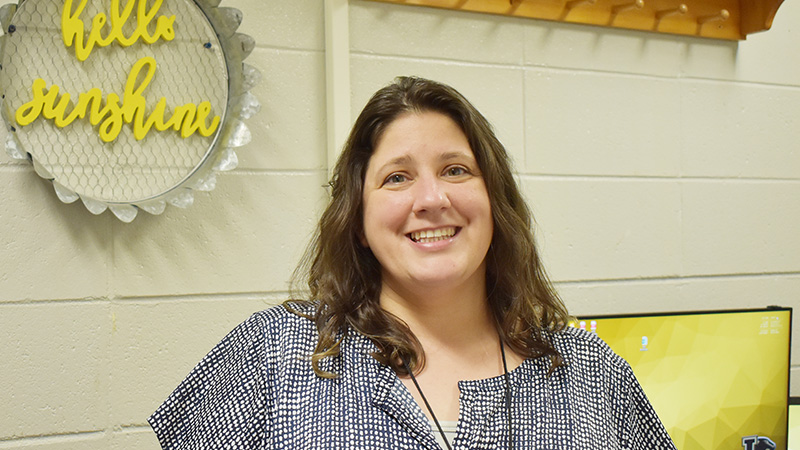 Some people know the right career for them right out of high school while others discover path that best suits them later in life. Though she once dreamed of being a physical therapist, Jaime Newill of Lanett Junior High School has found her passion in counseling.

The evidence of her hard work shone through last week when Newill was honored with the Teacher of the Year award for 2022-2023.

Newill, who began working at LJRHS this year, was stunned by the recognition. Despite her shyness, she was grateful to be chosen by her peers.

After graduating from Valley High School, Newill thought that her calling would be in physical therapy. She worked in a hospital setting as an aid and enjoyed getting to help and care for others.

However, life had something else in mind for her talents of guidance and caring. Newill and her husband had three sons, and when the last graduated to junior high, Newill decided to go back to school.

With the support of her parents, husband and children and former employer at Marsh McLennan Agency (MMA), Newill earned her bachelor’s degree from Point University and her master’s degree from Cappella University.

Newill praised the team around her at Lanett Jr High. Before she began working there, she worried that she would feel isolated in her job, but she said that it couldn’t be further from the truth. One of her fondest memories at the school so far has been working on the student council fundraiser with coworker Sondra McBride.

“Anytime I have a question, they have an answer,” Newill said. “They’ve been great. This is the place you want to be as a counselor because you’ve got all support in place that you need.”

Newill’s students are at a crucial point in their academic achievement. Newill recalled a study that said by fourth or fifth grade many children have decided if they believe they can graduate high school. For Newill, it’s important that every child knows each day that they are wanted and can achieve their goals.

“It’s on those days that I feel like I’ve planted good seeds. I don’t think that I can fix anything, but I hope that I get to plant good seeds each day that I can hopefully get to see later in the future growth of them,” Newill said.

Since she has been in the couseling career path, Newill said many counselors have placed a higher focus on the emotional standing of children, rather than just academic standing. Inspired by something one of her sons told her about, Newill began putting a basket of fidget toys out for the students to use while they talked. She switches them out from time to time to see which the kids like best.

“The kids seem to love the rubik’s cube. They’ll just sit in here and twist and turn it while they’re talking,” Newill said.

Though it can be hard to juggle all the tasks throughout the day, Newill said by far the easiest part of her day is interacting with her students. She finally found an outlet for her passion for caring for others. Though she enjoyed her old job, she never felt like she was making a difference in someone’s life.

“The students all have great hearts, and it’s just so easy to talk with them. They’re the reason I wanted to be here. They’ve got great hearts,” Newill said. “It just makes your job easier when you see that.”

As a counselor, Newill follows a holistic philosophy. She believes children cannot thrive in school if their social and emotional needs aren’t met. Newill works hard to nurture both the academic and social/emotional aspect of counseling. By taking this approach, she tries to help her students understand their strengths.

“I just want students to know that it’s OK to ask for help but they have it in themselves to come up with ways to achieve what they want to achieve,” Newill said. “I want them to know that they’re wanted here and that we’re happy to see them each day.”

Newill said that she was grateful to many at Lanett Junior High for their guidance and support, such as LHS counselor YaShika Odom, WO Lance counselor Wilfred Dunne and Christy Carpenter of the Lanett City Schools central office.